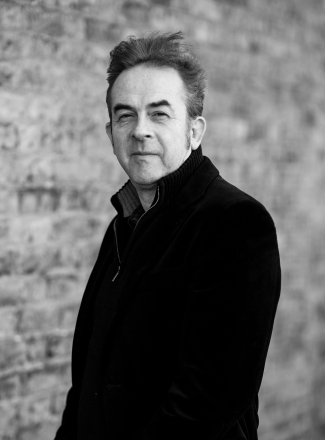 Today I’m super excited to have award winning crime writer (and good pal of mine) David Young guest posting on the CTG blog as part of his STASI WOLF Blog Tour. STASI WOLF is the second book in the Oberleutnant Karin Müller series following up from the smash hit STASI CHILD. Today, David Young is talking about the real life case that inspired the story in STASI WOLF.

Twenty-six years ago this month communist East Germany’s most well-known murder hunt began when the torso of a young boy was found stuffed in a suitcase by the side of the Halle to Leipzig rail line.

The body was soon identified as that of seven-year-old Lars Bense, who’d gone missing on a cinema trip two weeks earlier in the supposedly ideal socialist new city of Halle-Neustadt. A city where every apartment was near-identical, where streets didn’t have names, and where addresses were simply a strange six-digit code.

It’s the city that is the setting for Stasi Wolf, and although my fictional story is set six years earlier than the real-life murder, I’ve ‘borrowed’ some aspects of the murder investigation for the novel.

In the actual murder case, the only clue detectives had to the identity of the killer was found in a newspaper the body was wrapped in. A crossword puzzle was partially completed – the idiosyncratic handwriting, so experts said, was that of a middle-aged woman.

So began what still ranks as the biggest-ever handwriting sampling exercise in world history as part of the Kreuzworträtselmord – the Crossword Puzzle Murder. More than half-a-million samples of writing were collected, sometimes by ingenious methods such as staged competitions. 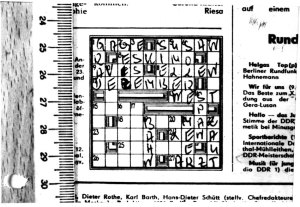 At the heart of the hunt were the GDR’s reviled secret police, the Stasi – only this time they were doing some good, providing the manpower to help the overworked CID section of the People’s Police. I have them playing the same role in the novel – but also have them constantly overseeing my fictional detective Karin Müller’s work, because they don’t want news of her investigation to alarm the model city’s residents. And that has some basis in truth too. The successful end of the actual investigation was – in East German times – only mentioned in one small local newspaper report.

Today Halle-Neustadt is battered and worn, with many of its apartment blocks empty and condemned. A once-thriving population of 100,000 – mostly workers at the giant chemical works at nearby Merseburg – has shrunk to less than 40,000. But memories of the Crossword Puzzle Murder live on.

The team that eventually cracked the case – after several months – was led by Halle murder squad head Hauptmann Siegfried Schwarz. ‘Sigi’ – as he’s known – is still a hunter – but now it’s his hobby, and animals and birds are the quarry, rather than murderers, in the fields north-east of Halle where he now lives.

He agreed to meet me in Halle-Neustadt as part of his research and talked me through some of his cases, as well as his most famous one.

Although generally a jovial man, his face clouded over with sadness and his voice cracked with emotion when he spoke of another case that is perhaps closer to the central plot of Stasi Wolf – the killing of a baby whose body was found stuffed in a drawer in Halle city itself.

But it’s the Crossword Puzzle that he’s most well-known for. Some nine months after the hunt began the culprit was arrested. The handwriting had been matched to a resident of Block 398 – a middle-aged woman working as a seasonal worker on the Baltic Coast.

A male friend of the woman’s daughter fitted the profile of the killer, and eventually confessed to murder and sexual abuse of the boy, and was jailed for life – although after reunification this sentence was reduced because as he was eighteen at the time, he qualified as a juvenile.

But – just as in the fictional Stasi Wolf – the real-life case has a final twist. His then girlfriend published what was supposedly a German-language ‘novel’ based on the murder that same year. Prosecutors opened a new case against her, on the grounds of alleged complicity to murder, because her statements in the novel differed from her accounts at the time.

However, she and her publishers insisted her book was fiction – and the case against her was subsequently dropped for lack of evidence.

A huge thank you to David Young for guest posting on the CTG blog today.

STASI WOLF is out now. Here’s the blurb: “East Germany, 1975. Karin Müller, sidelined from the murder squad in Berlin, jumps at the chance to be sent south to Halle-Neustadt, where a pair of infant twins have gone missing. But Müller soon finds her problems have followed her. Halle-Neustadt is a new town – the pride of the communist state – and she and her team are forbidden by the Stasi from publicising the disappearances, lest they tarnish the town’s flawless image. Meanwhile, in the eerily nameless streets and tower blocks, a child snatcher lurks, and the clock is ticking to rescue the twins alive . . .”

You can buy STASI WOLF from Amazon HERE 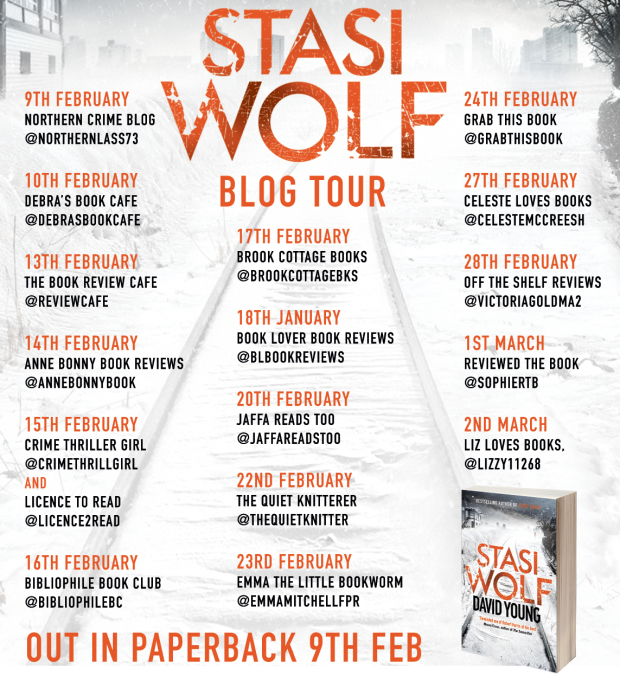 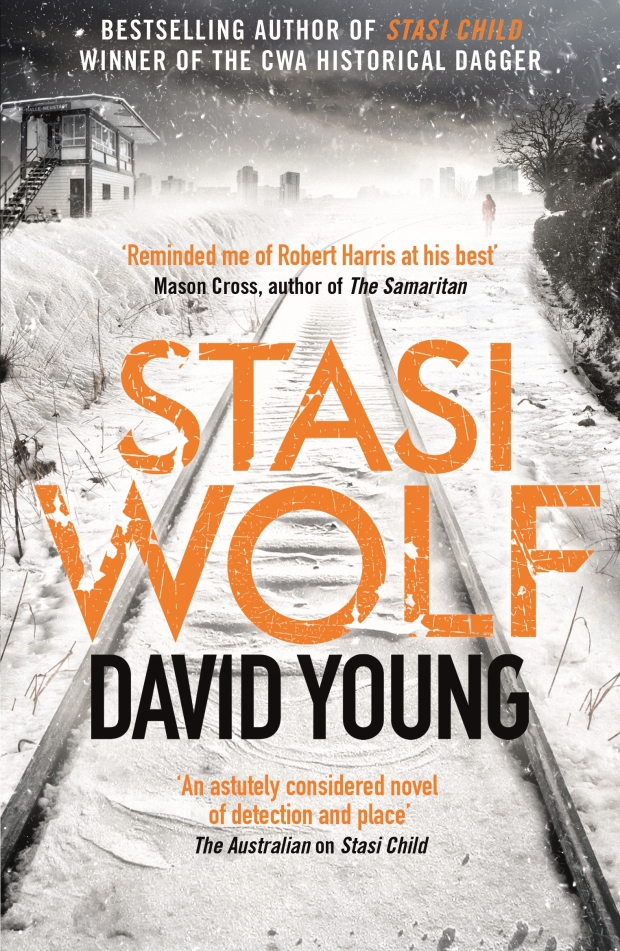 I am so excited to be a part of this cover reveal for the fantastic new book from CWA Historical Dagger 2016 winner, David Young.

Out on 9th February 2017 from Bonnier Zaffre, STASI WOLF is the second instalment in the Karin Müller series. I’ve had a sneak peep at the book already, and it’s a fabulous read.

What the blurb says: “How do you solve a murder when you can’t ask any questions? The gripping new thriller from the bestselling author of Stasi Child. East Germany, 1975. Karin Müller, sidelined from the murder squad in Berlin, jumps at the chance to be sent south to Halle-Neustadt, where a pair of infant twins have gone missing. But Müller soon finds her problems have followed her. Halle-Neustadt is a new town – the pride of the communist state – and she and her team are forbidden by the Stasi from publicising the disappearances, lest they tarnish the town’s flawless image. Meanwhile, in the eerily nameless streets and tower blocks, a child snatcher lurks, and the clock is ticking to rescue the twins alive . . .”

You can pre-order STASI WOLF from Amazon here

And be sure to follow David Young on Twitter @djy_writer to keep up to date with all his news.