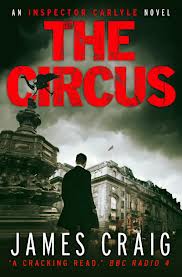 What the blurb says: “When the body of journalist Duncan Brown is found in the back of a rubbish truck, Inspector John Carlyle is thrown into the middle of a scandal that threatens to expose the corrupt links between the police, the political establishment and the hugely powerful Zenger media group.

Hunting down Brown’s killer, Carlyle finds himself going head-to-head with his nemesis, Trevor Miller. A former police officer turned security advisor to the Prime Minister, Miller has dirty money in his pockets and other people’s blood on his hands. Untouchable until now, he is prepared to kill again to protect his position, and having failed once already to dispose of Carlyle, he is not prepared to slip up again …”

I couldn’t help but warm to Inspector Carlyle. He’s a good bloke, battling a heavy workload in order to do a good job and solve his cases. And he’s got a lot on his plate, a targeted bomb that kills a teenager, a missing girl, and the murder of journalist Duncan Brown.

As Carlyle digs deeper into each case, he discovers a web of crime and corruption that stretches far into the halls of power in London. What made the story seem especially realistic for me is that it covers a number of themes that mirror much of what has happened in recent times, like phone hacking, and doesn’t shy away from showing a rather seedy side to journalism, politics and police work.

This is the fourth book in the bestselling Inspector Carlyle series. It’s a gritty story, set in a sinister London, and one that will have the reader trying to puzzle out both who did it and why did it.

I think fans of police procedurals will certainly enjoy this one.

The Circus by James Craig is out now, published by C&R Crime.