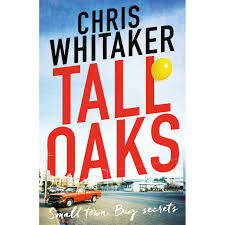 What the blurb says: “When three-year-old Harry goes missing, the whole of America turns its attention to one small town. Everyone is eager to help. Everyone is a suspect. Desperate mother Jess, whose grief is driving her to extreme measures. Teenage Manny, whose absent father has left him with strange ideas of how to make his mark. Photographer Jerry, who’s determined to break away from his controlling mother once and for all. And, investigating them all, a police chief with a hidden obsession of his own …”

OMG this book! It was my top crime novel read of 2016 and one of those books that stays with you long after you’ve finished it.

Because spine-chilling, heart-pounding dread is something that Chris Whitaker is a master at creating. You want look away, but he hooks you with brilliantly unique characters like the distraught and troubled Jess, noir gangster obsessive Manny, isolated photographer Jerry, cake creator extraordinaire French John, car salesman and looking for love Jared, and troubled Police Chief Jim and you can’t stop, you just can’t stop – you have to know what happens to them.

And there are lighter moments too. Chris Whitaker traverses darkness and light in a super skillful way, bringing a little lightness through dark humored moments between characters. The pace is face, the twists are plentiful, and the end revelation had me gasping out loud.

In short this is a must-read crime thriller, and I can’t recommend it highly enough. Buy it now!!

You can buy TALL OAKS from Amazon here