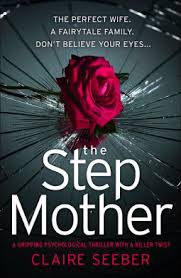 What the blurb says: “Jeanie and Matthew are a happily married couple who both have teenage children from previous relationships. No one said it would be easy to raise a blended family under one roof but Jeanie and Matthew are strong. They will make it work. And whilst Jeanie’s step-daughter Scarlett rejects her, Jeanie will just have to try harder to win her over.

But Jeanie has a past. A terrible secret she thought she’d buried a long time ago. And now, it’s coming to the surface, threatening to destroy her new marriage. Someone is playing a terrifying game on Jeanie and she must put a stop to it once and for all. After all, a fairytale needs a happy ending…doesn’t it?”

There are a lot of psychological thrillers around at the moment, so it was a real pleasure to read THE STEPMOTHER which makes a quirkily original addition to the sub-genre.

It tells the story of Jeanie, a single mum, who has recently married Matthew, who has custody of the children from his first marriage – Scarlet and Luke. As they start married life, and try to join their families together, Jeanie starts to feel increasing unwelcome in the family home. At first she explains same strange situations as teething problems and her own paranoia, but as the weeks and months pass, and increasingly bizarre and macabre things occur, it becomes very clear that someone doesn’t want Jeanie around. The question is, how far will they go to get rid of her?

The story is split between Jeanie’s viewpoint and that of Marlena – Jeanie’s younger and bolder sister – and uses a twist on the classic fairy tale of Snow White within the narrative, to great effect.

Jeanie is an immediately likable character. She’s human and flawed, a hopeless romantic even though life hasn’t been so great to her, and a devoted mother to her teenage son, Frank. I liked her, and wanted things to work out for her with her new marriage and blended family.

This, combined with the dark undertones, sense of impending doom and creeping dread that permeates the chapters, makes THE STEPMOTHER highly compelling and unputdownable.

THE STEPMOTHER is out now. To buy it from Amazon click here