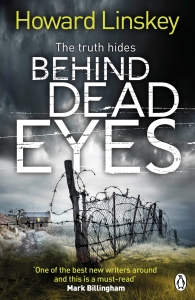 Today I’m delighted to be able to bring you an exclusive sneak peep at the first chapter of Howard Linskey’s latest crime novel – BEHIND DEAD EYES.

Here’s what the blurb says: “A corpse is found: its identity extinguished in the most shocking manner imaginable. Detective Ian Bradshaw can’t catch the killer if no one can ID the victim. Out there, somewhere, a missing young woman may hold the answer. Journalist Helen Norton is about to uncover a massive criminal conspiracy. She just needs the final piece of the puzzle. Soon, she will learn the price of the truth.

True-crime writer Tom Carney receives letters from a convicted murderer who insists he is innocent. His argument is persuasive – but psychopaths are often said to be charming …”

So, to the extract …

Perhaps you think I’m a monster. Is that it?
Maybe that’s why you‘ve not been in touch. Have you read terrible things about me Tom? Heard stories that disturbed you? None of them are true.

I’ve done bad things of course, who hasn’t? None of us are saints. Let’s not bother to pretend we are. I know the one thing you truly understand is human frailty Tom. I’ve had to account for my actions and I’ve paid a very heavy penalty for my misdeeds but I can assure you I never killed anyone.

Did you believe the poison that drips from the pens of those so- called reporters? They’re not interested in the truth, none of them. They spend their lives wading through other people’s trash looking for dirt, turning over rocks to see what crawls out. And they have the nerve to call me names.

What chance did they give me?

Please see me. I’d visit you but clearly they won’t allow that. If we were to meet face to face, I’m certain I could convince you I am not the man they say I am. If you can look me in the eye and actually believe I am capable of such savagery, then I promise I won’t blame you for leaving me here to rot, so what exactly have you got to lose?

I think you are a truth-seeker Tom but you don’t seem to be at all interested in my truth. That’s disappointing.

You are my last and only chance Tom Carney. Please DO NOT continue to ignore me.

Yours, in hope and expectation.

Tom Carney was having a very bad day. Maybe it was the new kitchen cupboard doors and the way they refused to hang straight or the boiler going on the blink again or perhaps it was the letter from a convicted murderer.

No, it was definitely the boiler. Bloody thing.

He hadn’t owned the house long but it seemed virtually every part of the offending boiler had failed and been replaced at great cost, only for another of its components to buckle under the strain soon afterwards and cease to function. He should have got a new boiler when he bought the creaking, old pile but funds were short then and virtually non-existent today, so he’d opted for the false economy of replacing it bit by bit instead of wholesale. How he regretted that now, as he stood tapping the pipes with a wrench in an attempt to knock the ancient thing back into life; a tactic that had, amazingly, actually worked once before but, unsurprisingly, failed to bear fruit this time. Tom exhaled, swore and surveyed the stone-cold water tank ruefully. It came to something when a personal letter from a man who had beaten someone to death with a hammer was the least of his concerns.

He went back downstairs and tried to phone the plumber again but the guy didn’t pick up. If events ran their usual course, Tom would have to leave several messages before the plumber eventually got back to him. He might then grudgingly offer to ‘fit him in’ towards the end of his working week. The plumber would do this while making it sound as if he was granting Tom an immense favour. If Tom was really lucky the bloke might even turn up on the actual day but he knew this was far from guaranteed.

Tom recorded a message then picked up the envelope from the hall table. The words ‘FAO TOM CARNEY’ were scrawled on it in large block capitals with a marker pen, above an address hand written in biro. It was disconcerting to realise one of the relatively few people who knew where Tom lived these days was a murderer.

For the attention of Tom Carney? Why not some other reporter? One who was actually still reporting perhaps and not so disillusioned he’d turned his back on the whole bloody profession, to plough what was left of his money into renovating a crumbling money pit? This was the third letter he’d received from Richard Bell. Tom had read then studiously ignored the previous two, hoping one of the north-east’s most notorious killers would eventually tire of contacting him but, just like his victim, Tom had clearly underestimated the killer’s resolve.

Bell was a determined man but was he a psychopath? He read the letter again, surveying the handwriting for evidence of derangement but there was none. This wasn’t some rambling, half-crazed diatribe, scrawled in crayon and inspired by demonic voices. It was angry and there was an undeniable level of frustration at Tom’s failure to engage with him but that was all. Having singled Tom out, Bell presumably felt the hurt of rejection. The handwriting was neat enough and it flowed evenly across the page. Tom couldn’t help wondering if this really was the same hand that brought a hammer crashing down repeatedly onto a defenceless woman’s skull until she lay dead in the front seat of her own car? A jury thought so and the judge had told Bell he was a monster. Tom remembered that much about a case that dominated the front pages for days a couple of years back. Was Richard Bell insane or was he really an innocent man; the latest in a long line of miscarriages of justice in a British legal system discredited by one scandal after another.

Tom took the letter into his living room, if he could still accurately call it that with the carpet ripped up and tools scattered everywhere. He sat in the room’s solitary arm chair and read it once more. Richard Bell’s message was consistent and clear. He wasn’t mad and he wasn’t bad. He hadn’t killed his lover. Someone else had done that and he was still out there.

BEHIND DEAD EYES is out now. You can buy it here from  Amazon here 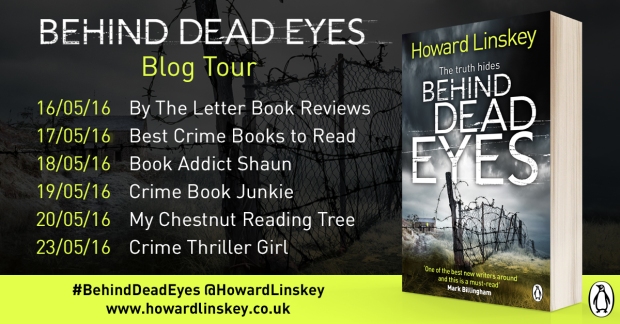