Today I’m delighted to welcome the lovely David Jackson to the CTG blog for a stop on his #ATappingAtMyDoor blog tour. Following the success of his Callum Doyle novels, A Tapping At My Door is the first book in a fantastic new crime series featuring DS Nathan Cody. As well as being a best selling crime writer, David is a university lecturer, so he knows the challenges of juggling two jobs. In this post he’s sharing just how he manages to do both, with the help of a little “bum glue” …

To an author, bum glue is important stuff. You can’t buy it in a shop (you could try asking for it, but I dread to think what you’d get), but you’re going to need plenty of it if you’re going to get that novel finished.

Bum glue is a term used to represent the staying power you’ll need to keep your butt in a chair while you write. Writing – or at least writing well – can be hard work, and many of us will avoid hard work if we can get away with it. This is especially true when there are untold numbers of other demands on our time.

It’s no different for me. I’m not a full time author: I have a day job as a university academic. I have a family. I also want a life. I want to watch TV and read and socialise and sit in the garden and go on long walks and sleep. All that quickly eats into the precious commodity called time.

So how on earth do I get my books written? People ask me that a lot. And I have two answers – one philosophical and one practical.

The philosophical answer is that, if you want something badly enough, you will always find time for it. Nobody who is thinking of having kids says they haven’t got the time. It’s a given that you will make time. You may be constantly tired and irritable, and you may have to say goodbye to a social life, but you will make time. Think of writing a book as a slightly less intense version of the ordeal that is child-raising, and you’ll be fine!

Those of you who haven’t already decided that writing a book sounds like the seventh circle of Hell will want to be rewarded with something a little bit more practical at this point, so here’s my tip of the week.

First of all, get out of the mindset that writing HAS to be regular and HAS to be of uniform consistency. Writing is not a bowel movement! I sometimes go for days without writing a word, and that’s okay. I’ll make up for it on another day. Getting worked up about missed sessions can lead to guilt, a sense of failure, and ultimately quitting.

Next, stop searching for all those hours you think you’ll need. The likelihood is that you won’t find enough of them, and again you’ll get frustrated. Instead, find minutes. Ten of them will do. Maybe even five. Even the busiest of us can find five spare minutes. And in those five minutes, write like hell.

If you do this, two things will happen. The first is that you will have made a start, and that’s half the battle (Initium est dimidium facti, as the Romans were fond of saying). The other thing is that, once you’ve got into your story, you won’t want to finish. And nor should you. Your five minutes are up – so what? Just keep the momentum going. Five minutes will quickly become ten, and before you know it you’ll have been writing for half an hour or more.

Later in the day, find another five minutes and repeat. The secret is to trick your own mind into believing that the task is not as daunting as it appears.

Got five minutes now? Sure you have. Why not write some words?

Big thanks to the fabulous David Jackson for chatting to us today about bum glue.

A TAPPING AT MY DOOR is the first book in a fantastic new crime series featuring Nathan Cody. Here’s the blurb: “A woman at home in Liverpool is disturbed by a persistent tapping at her back door. She’s unnerved to discover the culprit is a raven, and tries to shoo it away. Which is when the killer strikes. DS Nathan Cody, just back to work after an undercover mission that went horrifyingly wrong, is put on the case. But the police have no leads, except the body of the bird – and the victim’s missing eyes. As flashbacks from his past begin to intrude, Cody realizes he is battling not just a murderer, but his own inner demons too. And then there’s a second murder, and Cody realizes the threat isn’t to the people of Liverpool after all – it’s to the police.”

A TAPPING AT MY DOOR is out in hardback and eBook on the 7th April. You can pre-order it here from Amazon.

You can find out more about David Jackson by hopping over to his website www.davidjacksonbooks.com and following him on Twitter @Author_Dave

And be sure to check out all the other great stops along the route of the A Tapping At My Door Blog Tour: 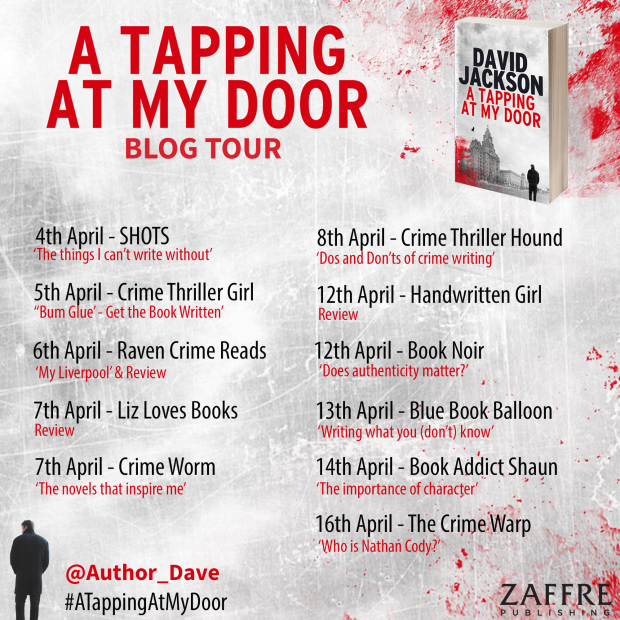 6 thoughts on “#ATappingAtMyDoor Blog Tour: David Jackson on the importance of “Bum Glue””