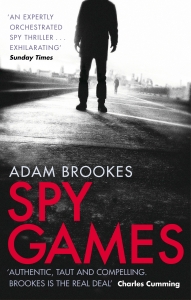 Here’s what the blurb says: “Journalist Philip Mangan throws himself back into the dangerous world of international secrets in the follow-up to the highly acclaimed thriller NIGHT HERON. But this time, no one is to be trusted… Fearing for his life, Mangan has gone into hiding from the Chinese agents who have identified him as a British spy. His reputation and life are in tatters. But when he is caught in a terrorist attack in East Africa and a shadowy figure approaches him in the dead of night with information on its origins, Mangan is suddenly back in the eye of the storm. Meanwhile, thousands of miles away on a humid Hong Kong night, a key MI6 source is murdered minutes after meeting spy Trish Patterson. From Washington D.C. to the hallowed halls of Oxford University and dusty African streets, a sinister power is stirring which will use Mangan and Patterson as its pawns – if they survive.”

The book isn’t published until the 10th, but keep reading for a delicious little taster …

She moves well, thought the watcher.

She moves so that her size seems to diminish. She conceals her strength. She flits by a wall, a storefront, and she is gone before you give her a second glance. You don’t notice her, he thought.

You don’t notice how dangerous she is.

The wind was quickening, the sky the colour of slate. The woman was well ahead of him now, making for the park’s lurid front gate. The watcher quickened his pace, reeling himself in. She wore a scarf of beige linen that covered her hair and left her face in shadow. She wore a loose shirt and trousers in dull colours, and sensible shoes. From a distance, her silhouette was that of a woman from the Malay Peninsula or Indonesia, one of Hong Kong’s faceless migrants, a domestic, a housekeeper on her day off, perhaps. So, a trip to Ocean Park, for the aquarium, candy floss, a rollercoaster.

A treat! Even on this bleak day, with a typhoon churning in from the South China Sea. The woman hid her eyes behind sunglasses. Her skin was very dark.

She made for the ticket booth. The watcher stopped and searched passers-by for an anomaly, the flicker of intention that, to his eye, would betray the presence of hostile surveillance.

He reached into his pocket and clicked Send.

Patterson heard the signal, sudden and sharp in her earpiece. She responded with a double click. Understood.

She ran her hand over her headscarf, tugged it forward a little, eased her face further into its recesses. She walked to the window, turned her face down.

The girl at the ticket counter looked at her, confused.

‘Typhoon coming,’ she said. She pointed at a sign taped to the glass. It read: ‘Typhoon Signal Number 3 Is Hoisted’.

The girl raised her eyebrows, then looked to her screen and tapped. Patterson paid in cash, turned and walked to the turnstiles. She took the famous cable car up the headland, hundreds of feet above the rocks and crashing surf, sitting alone in a tiny car that bucked and jittered in the wind. Unnerved, she gripped the bars, looked out at a venomous green sea and watched the freighters fading in the gloom.

Another two hours of this at least, she thought. More. Surveillance detection runs are sent by the intelligence gods to try the soul.

Amber, amber. His voice thin in her ear, distant, yet intimate.

The cable car slowed, deposited her on a platform. The watcher was there ahead of her. How had he managed that? He sat on a bench smoking a cigarette, looking at a map of Ocean Park’s recreational

delights. She walked on, past the Sea Jelly Spectacular, the Rainforest Exhibit. The watcher inscribed wide arcs around her as the wind hissed in the palm trees. After this there would be another bus to take them through the Aberdeen Tunnel, followed by a taxi, then more pavement work in the rain, hour after dreary hour of it until the watchers pronounced her utterly, definitively, conclusively clean.

For this was China, where the streets were so saturated with surveillance that agent and case officer moved with the caution of divers in some deep sea, silent, swimming slowly towards each other in the dark.

Spy Games by Adam Brookes is published 10th March by Sphere priced at £7.99 in paperback.

You can buy it here from Waterstones. And here from Amazon. 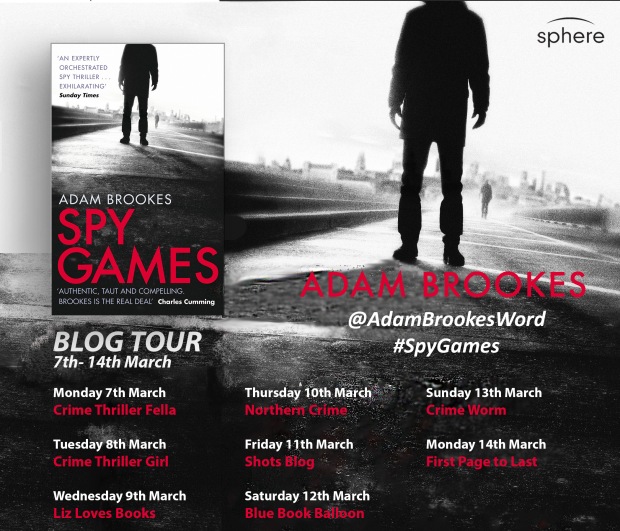