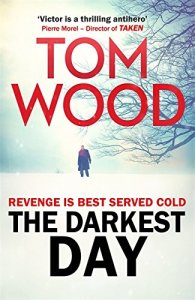 Today crime writer Tom Wood – creator of the Victor the Assassin thriller series – has dropped by the CTG blog to tell us all about his latest book THE DARKEST DAY which is published today by Sphere.

So, let’s get straight to the questions …

Your latest thriller – THE DARKEST DAY – featuring Victor the Assassin is out today. Can you tell us a bit about it?

The latest book sees Victor targeted by a rival assassin named Raven, who comes perilously close to succeeding in an attempt on his life. He doesn’t know why she came after him or who she is working for, but as Victor is a pragmatic soul he deems the best way to deal with the threat she poses is to kill her. His hunt takes him to New York City, where he slowly realises there are powerful forces at work and he’s put himself in even more danger by going after Raven.

Victor is a fascinating character – ruthlessly brutal, yet also rather charming – what was your inspiration for creating him?

I grew up preferring the bad guys to the good guys, so Victor was the inevitable protagonist I would end up writing about. He’s probably a coming together of multiple antiheroes from cinema and literature, but when I first wrote about him I just wanted to write about an assassin who wasn’t going to have a crisis of conscience whenever he killed someone. He then grew out of this concept—an antihero who wasn’t conflicted or troubled.

Like you, Victor practises the martial art Krav Maga – are there other similarities between the two of you?

I haven’t trained for a while after breaking a bone in my right hand, so I think we can safely say that Victor is a lot tougher than I am. I would like to think we’re very different—considering he’s a professional murderer—but I suppose we do have similarities. We both pay a lot of attention to our surroundings; we both notice things that maybe other people don’t. But he does so because he’s in constant peril, whereas I tend to do so out of boredom. Also, we both agree that littering is unforgiveable.

Can you tell us a bit about your writing process – do you take a Victor-esq approach and plot everything out in advance, or do you dive right in and see where the story takes you?

About half and half on average. I think you have to have some planning for a plot to work. I think you can always spot a book that hasn’t had any planning because the ending is a big letdown—the writer writes themselves into a corner. I always start with some overall idea—Victor on the run; Victor undercover; Victor as a bodyguard etc—but the approach is different each time. When writing a series I think the key is for each book to be ‘the same, but different’, which is one of those classic Hollywood-esque oxymoron, but has a little merit. I want every story to be different from the last whilst retaining characteristic of the series and staying faithful to the character. No one wants to read about a week in Victor’s life where nothing happens, for example. One of the ways I attempt this is to vary how much I plot and plan from book to book, so if the writing process is different and interesting for me in each time out then hopefully that will translate into the reading experience.

I know that I mustn’t give away the ending – OMG that ending!! (it’s a corker of a twist) – but had you always planned for that to happen or did it happen organically?

I wrote the final scene long before the book was finished, but I hadn’t planned it in advance—it just fell onto the page nicely because I understood the characters so well. Even though I didn’t know exactly the route the story would take to reach that finale, I knew it was the right ending. I can’t really say anything further about it without spoilers, so I’ll say that it almost didn’t make it into the book because weeks and weeks after writing it the file became corrupted on a cloud storage—thanks Microsoft!—and the scene was lost. I was suitably enraged, but also terrified of rewriting it from memory and the scene losing out as a result. Mercifully, I managed to rewrite it without too much trouble, but I argued a little with my editor about how it should play out. He would have preferred it to be more ambiguous, but I disagreed. Several of my books have story threads that are not fully wrapped up as it often seems too contrived otherwise, but also a cliffhanger ending feels disrespectful to the reader.

Can you tell us what’s next for Victor – is there another series book planned and, if so, what details can you reveal?

I’ve just delivered the sixth book, titled A Time to Die, which sees Victor hired by MI6 to kill a ruthless Serbian war criminal who has been in hiding after escaping justice years before. It’s probably darker in tone than the past books, whilst staying faithful to the series as a whole—classically the same, but different. Normally, after delivering a book, I hate it and think it’s terrible after spending months and months thinking about nothing else, but I’m very excited about this one as the story came together easier than it ever has before.

And, finally, looking forward to next year, what does 2016 have in store for you?

A Time to Die will be out in April, so the first couple of months of 2016 will be spent frantically editing and polishing. Then I’ll no doubt begin work on my seventh book, whatever that proves to be.

A big thank you to Tom Wood for dropping by and telling us all about his latest (brilliant) thriller – THE DARKEST DAY. To find out more about Tom hop on over to his website at www.tomwoodbooks.com and follow him on Twitter @TheTomWood

And be sure to pop back here next week to read my review!

One thought on “CTG Interviews: Tom Wood about his latest thriller THE DARKEST DAY”