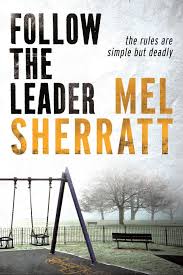 What the blurb says: “A man’s body is found on a canal towpath. In his pocket, a magnetic letter in the shape of an E. Days later, a second victim is found, this time with the letter V tucked into her clothing. As the body count rises, the eerie, childlike clues point to a pattern that sends DS Allie Shenton and her colleagues into full alert. The race is on. Allie and the team must work quickly to determine where the killer will strike next. The rules are simple but deadly—to catch the killer, they must Follow the Leader.”

Follow the Leader is the second book in the DS Allie Shenton series, following on from Taunting the Dead, and it’s a pulse pounder of a story. The title might allude to a playground game and the story be structured around a nursery counting rhyme, but this is no light-hearted tale of child’s play. It’s a gritty, rollercoaster of a read, with a well-planned and intelligent killer leading DS Allie Shenton and her team in a deadly race against time.

DS Allie Shenton is a courageous and dynamic lead character. She’s proactive and smart, utilizing the skills of her team to full advantage to investigate the murders and work out the killer’s pattern in order to determine who will be the next target. It’s a difficult case to work for some of her team, especially when a connection to one of the local schools and old school friends begins to emerge. As the attacks increase, it becomes a harder case for Allie Shenton too – there are similarities between one of the attacks and the vicious attack that critically injured her sister, Karen, several years previously – an attack for which the perpetrator was never caught.

Packed with intrigue and brilliantly drawn characters, the story twists and turns at a rapid pace and pulls the reader along with the action, defying you to put it down – I couldn’t, and devoured the book in a single weekend! It also lets the reader glimpse into the world of the killer, showing the events in their life that have led them to the extreme action they’re now taking in revenge.

Artfully plotted, this gritty and emotive story is a must read for fans of police procedurals.

2 thoughts on “CTG Reviews: Follow the Leader by Mel Sherratt”