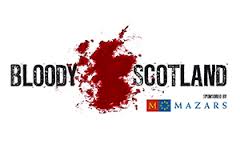 As well as a whole host of interviews, panels and talks, there’ll be a medieval murder mystery event in Stirling Castle, a true-crime dramatisation at Stirling Sheriff Court, and Scotland will take on England in a crime writers’ football match.

Add into the mix discussions on the evergreen figure of the Glasgow gangster, the genre of domestic noir, and morality in crime fiction, plus a special session on The Female in Crime Fiction looking at the enormous impact female writers and their characters have in the genre, and it looks like this year is going to be even bigger and better than last year – which was already rather fabulous! (read my blog on the 2013 festival here).

And, not to forget, there’s the announcement of the 2014 winner of the prestigious Deanston Scottish Crime Book of the Year Award.

To find out more about the event hop on over to their website and view the full programme at http://www.bloodyscotland.com/