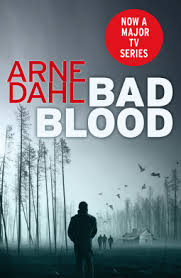 What the blurb says: “Detective Paul Hjelm and his team receive an urgent call from America. A murderer whose methods bear a frightening resemblance to a serial killer the FBI believed long dead is apparently on his way to Sweden.

For years the FBI hunted the so-called ‘Kentucky Killer’, their agents haunted by the terrible injuries he inflicted on his victims through his signature device: a weapon that squeezed the vocal cords shut.

Has he now somehow returned from beyond the grave to torture a new generation, or do they have a copycat on their hands?”

Arne Dahl is an award-winning Swedish crime novelist. Bad Blood is the second book in his Intercrime series and picks up a year after the first left off. The ‘A-Unit’ – a special unit within the National Criminal Police founded to handle violent crimes of an international nature – has had a quiet 12 months, but that is all set to change after an academic on his way to Sweden is found tortured and murdered at JKF Airport, New York City. Someone took his place on the flight, and the American police believe that person is the ‘Kentucky Killer’.

Detective Paul Hjelm and A-Unit attempt to prevent entry at Swedish immigration, but their plans backfire, and the serial killer enters the country. It’s not long before the body count begins to rise.

The story combines police procedure with twists, turns and double-backs to keep the intrigue level high and the mystery surrounding the killer’s identity deepening. As Detective Paul Hjelm and the team investigate, they realise that they need to learn more about the Kentucky Killer’s history in order to try and crack the case. This leads to the team splitting up, with two detectives flying to America and the rest of the team following up the murders in Sweden. This double strand investigation allows the reader to follow the trail of evidence in both countries, and lets you really get to know each member of the A-Unit team and their own particular methods of policing.

But it’s not just the investigation that keeps you reading, the relationships between the characters – not least Detective Paul Hjelm and his colleague Kerstin Holm, who are partnered up on the trip to America and working closely together for the first time since their brief affair – are interwoven and integral to the decisions they make, and the consequences they have for the case.

As the investigation gathers pace in Sweden and America it’s clear that only by working together will they be able to solve the case and put a halt to the killings.

A highly atmospheric and engrossing read.

[Many thanks to Harvill Secker for my copy of Bad Blood]