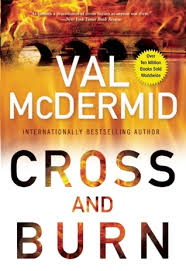 What the blurb says: “Tony and Carol are facing the biggest challenge of their professional lives: how to live without each other. No one has seen Carol in three months, and the police brass no longer need Tony’s services. Even worse, both hold Tony responsible for the bloody havoc their last case wreaked on Carol’s life and family, and Carol has sworn she’ll never speak to Tony again. But just because Tony and Carol’s relationship is finished doesn’t mean that the killing is: a body has been discovered in an abandoned flat inhabited by squatters. Paula McIntyre, the number two detective investigating, is struggling to adapt to her new job and new boss who is emphatically not Carol. As connections to other missing or dead women emerge, a horrifying pattern becomes clear: someone is killing women, all of whom bear a striking resemblance to Carol Jordan. And when the evidence begins to point in a disturbing and unexpected direction, thinking the unthinkable seems the only possible answer.”

At the start of this book police detective Carol Jordan and clinical psychologist Tony Hill are not in a good place. Carol is broken. She’s turned her back on her career and her friends and thrown herself into a restoration project. Blamed by Carol for her brother’s death, Tony is guilt-ridden and lost. He’s buried himself in his work and his living alone. The rest of the MIT have moved on, but things just aren’t the same in their new roles. But when Paula McIntyre, ex MIT and now newly appointed bagman to DCI Fielding, gets a call that puts her on a case to challenge both her skills and her loyalties she knows that she’ll need the help of her old colleagues to make sure justice is done.

As you’d expect from Val McDermid the story is beautifully crafted, and although the book is focused around a murder case,  it is the relationships between the characters that make it such compelling reading. The characters feel utterly real: smart, flawed, passionate, withdrawn, searching, misguided, determined. The relationships that bound them together at MIT and made the team so strong have drifted, but to solve the case Paula has to reconnect them. It’s not easy, but as she juggles the pressures of working a tough case under a new boss, the changed dynamic in her personal life of a teenage boy to look after with her partner, Elinor, and gradually draws in input from her MIT colleagues it seems that they’re getting closer to the killer. Then the forensic evidence points in a direction none of them would ever have expected.

With her new DCI unable to see past the forensics, Paula draws on the skills of her ex MIT colleagues – Carol, Tony, Stacey to name a few – to investigate an alternative line of enquiry. She’s treading a dangerous path, one false move and her career will be over. But some things are more important – justice, both for the victims and for the wrongfully accused. But as another woman goes missing, can Paula find the real killer and save his latest victim before it’s too late?

Luckily Paula isn’t alone. As Carol’s strong sense of justice, and her determination to see it brought, gradually bring her back into the environment she’d left behind. But the question remains: will Carol and Tony’s relationship ever recover?